Bill Sherman, a designer and Andrew Fraser, an operations director launched their brand Ajaxx63 in 1997. They were influenced to start their own line of outfits after looking at the street scenes and the gay club scene in New York. In fact, it was New York's colourful nightlife that had a great impact on them, and as a result, they decided to start their brand. They chose Seattle to start their new business. Initially a two-man business, Ajaxx63 has now grown to become a multinational business selling their products at many online locations and about 400 retail outlets. Since it popularises gay fashion, Ajaxx63 has appeared in many gay publications and on series like "Queer as Folk", "What not to Wear", "Queer eye for the Straight Guy", etc.

As designer Bill Sherman admits, the brand is named after their dog, named after the Trojan warrior Ajax. The name Ajaxx63 is synonymous with gay clothing today just like the founders wanted. Creating some sexy and colourful menswear, Ajaxx63 has gained worldwide popularity despite a few controversies over the years. Their muscle top T shirts and tank top T shirts are just so colourful and stylish, perfect for enhancing your looks. Their short sleeved T shirts with trendy logos are simply modish. They create some funky jewelry and fashionable caps, long sleeved T shirts and beanies as well.

Ajaxx63's urban-oriented, gay-targeted graphics were first sold at Pride Festivals, becoming an instant sensation after appearing on the first season of "Queer As Folk" and partnering with Gay.com that catapulted them to high profile status on the national gay retail scene. Ajaxx63 has been featured in numerous gay fashion publications and has appeared regularly on Showtime’s hit series "Queer as Folk", as well as "Queer eye for the Straight Guy", "What not to Wear", (in a good way), "Open Bar", MTV, part of the regular wardrobe on "Q television" and many more.

Ajaxx63 treat T-shirts as fashion. They release their designs in "fashion seasons" and think of them as collections with themes and concepts. Ajaxx63 is redefining how gay dudes look at t-shirts. Ajaxx63 is definitely a post-modern approach to what people perceive as gay clothing. Their clothes are modern, energetic and fashionable. Forget about rainbows, triangles and teddy bears, Ajaxx63 designs are the new banners of today's gay culture. 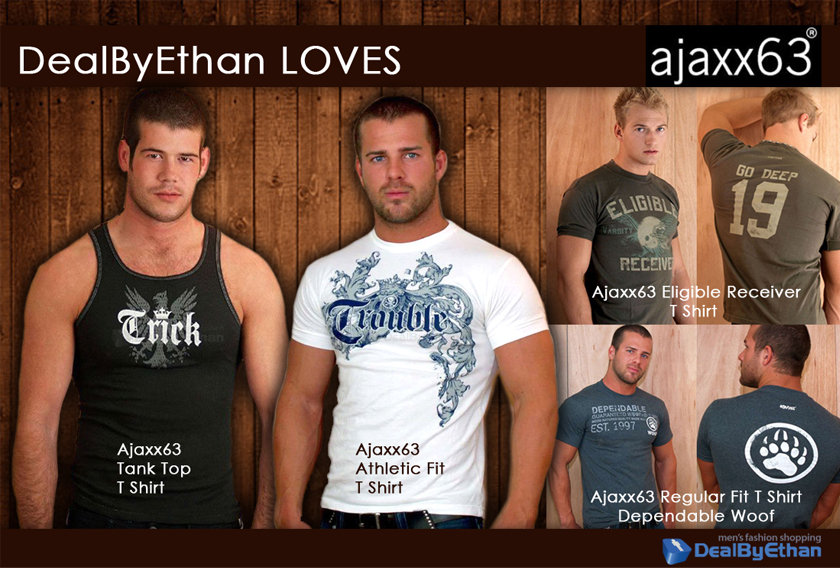