Among the many men’s underwear brands, the brand name Groovin ranks high on the popularity list. Designed in Japan, their range of varied underwear styles are popular among the young fashion conscious male population. Focused on providing the ultimate fun, style and comfort in men’s underwear, their underwear styles and cuts are varied in nature. Just take a look at the hot Groovin designs here!

Using minimal fabric, their thong underwear ensures all day comfort while making you look and feel sexy to no end. Unlike the typical sports jock, their jockstrap underwear is fashioned like a brief but provides the support of a regular jock.

You can even flaunt your chiselled physique in some Groovin boxer brief underwear and brief underwear creations that are guaranteed to provide you with exceptional comfort and form enhancing experience. Moulding your body to perfection, their low waist, close-fitting underwear are fun and stylish options as day to day underwear.

Are you the hunter, or the hunted? There once was a man, just like any other man. Nothing separated him from the grayness of the modern, urban lifestyle. He wore the classy suit, the shiny watch, the fancy shoes, just as you would expect from any normal 9-5 kind of guy walking down the street. But this guy knew what he wanted. He was a go-getter. Beneath that exterior, there lay dormant a wild side. When you stripped that exterior away, what was left of the man was basic, untamed sex appeal wrapped in a Groovin low rise brief made of fabric so thin, you could almost see right through it – the alluring underwear of a hunter who knew how to pull someone in.

Groovin underwear is made to bring those basic animal instincts to the fore. They use the softest, thinnest fabric available to create daring designs and styles. If you could wear raw, wild sex appeal, it would feel and look exactly like Groovin underwear; pure adventure blended with superb style and generously spiked with eroticism. Just take a look at this Groovin cup boxer brief in smouldering black. To say that Groovin underwear is not for conservative men is a serious understatement. Groovin underwear is for the daring, adventurous and untamed man inside you.

Groovin designs are minimalistic and use a smooth, silky, hi-tech mixture of grade-A nylon and Lycra, a blend so pleasurable to have up against your skin that it should probably be outlawed! They are not one of those "in-your-face" brands that spend millions on marketing and pump up their prices. Groovin does their job silently without making too much fuss about it, and they know their job just as well as you know why you want to wear their garments – to bring out that savage hunter in you. Visit DealByEthan.com and browse through their Groovin collection today if you are a man looking to live a little on the wild side. 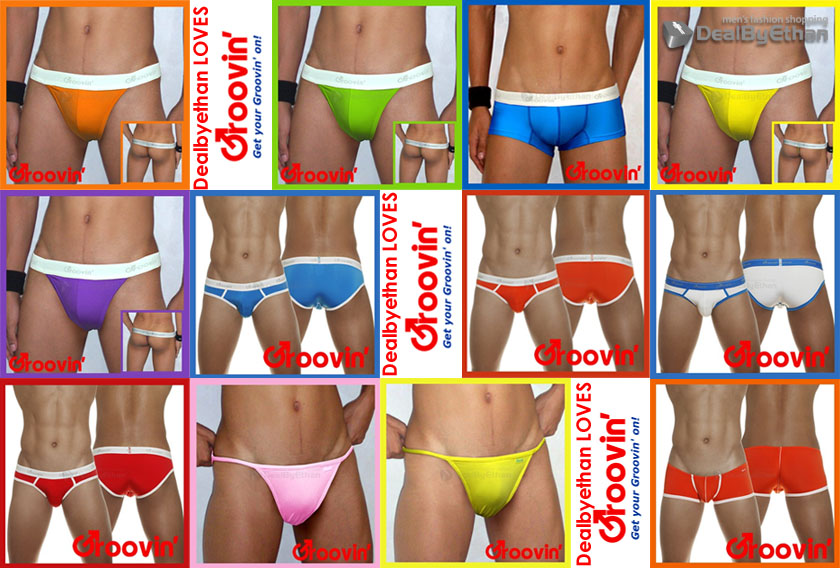